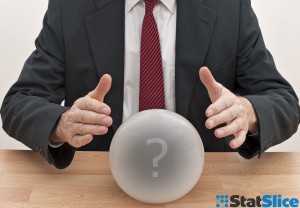 I recently read a post on Forbes by Prakash Nanduri in which he made his 5 predictions for Business Intelligence in 2014. I really enjoyed this article, and I think most of his points are dead-on. In general, Prakash talks about the fact that BI is no longer a new science, and we are going to have to justify our value to the business. This is especially true with big data which has exploded this past year.

Let’s take a look at the 5 predictions talked about in the article and explore some of my predictions for 2014.

Big Data Will Need to Prove Its Business Value

Big data is the hot topic in BI these days. StatSlice has been busy reviewing a number of different platforms trying to help our customers determine how these tools will fit into their environment. What we have determined for most of these tools is that they all have their place as long as there is a solid business need. It’s generally not a good idea to add a new tool just for the sake of having new tools.

I saw this with one of my clients up in Seattle a while back. They saw the big data explosion coming and went ahead and set up a large number of Greenplum nodes. The IT department was just itching for someone to use it, so when my firm came in to build a new marketing data warehouse for them, they insisted that we use it. It turned out that a Massively Parallel Processing environment was not a good fit for this particular project. Greenplum is great for a lot of things, but forcing a big data platform onto a project without considering if there was a strong business need ultimately ended up costing more time and effort than was necessary.

All you spreadsheet jockeys reading this right now are chuckling to yourself thinking there is no way this one can be true. While it is still too early to tell, I would tend to bet on Tableau and QlikView here. We have seen a recent increase in customers asking about Tableau and wanting demos on dashboarding tools in general. I can tell you from my personal experience that Tableau can more easily help you combine, analyze, and visualize data better than Excel ever could.

I had a friend of mine ask for my help with some Excel macros just the other day. She sent me over her spreadsheet and asked me how I would combine data from these two sources. I started to show her how the “vlookup” function worked, and she just stopped me and said “Wouldn’t it be faster to do this manually?” “Faster”? No. Easier for a non-programmer to understand, maybe. What’s the correct answer here? Tools like Tableau and QlikView have solved this issue and gone way, way farther to help you analyze data.

By the End of 2014, Half of All BI Vendors Will Begin Seeking an Exit

This is a pretty bold statement. He’s referring to 2007 when Business Objects and Cognos were bought up by the big dogs. I don’t think we’ve really seen a large number of BI vendors crop up in the past few years, so I don’t really see how he can expect half of the vendors to either leave or get bought out.

I have seen a recent surge in dashboard companies and cloud-based BI software which he may be what he’s talking about here. Tableau certainly has enough momentum to buy out some small dashboard vendors and incorporate some of their features into its own, already feature-rich platform, but I don’t see this as being a major conclusion to watch out for in 2014.

We Can Finally Realize the Full Potential of Data Scientists

This is the prediction that I would have made had I not read Prakash’s article first. I see this year as the rise of the data scientist. A data scientist is an advanced form of business analyst. A data scientist builds on techniques and theories from many fields, including mathematics, statistics, data engineering, pattern recognition, visualization, uncertainly modeling, and data warehousing with the goal of extracting meaning from data.

I believe that this year will bring the biggest improvements in visualization and ETL tools that will allow data scientists to focus on extracting meaning from their data  instead of spending the majority of their time moving data around. We have already seen some great tools from Varigence and LeapFrogBI that speed up ETL development greatly. If we combine those advancements with visualization tools like Tableau and QlikView, I think we might be able to expect a new level of BI to come about.

My predictions for business intelligence this year center on speed of development and ease of change. It is my belief that most business intelligence data warehouse projects that fail, fail because they aren’t flexible enough to keep up with changing business needs. We all say that we have to work at the speed of business, but what that really means is that we have to go rewrite our ETL packages every time a business user decides he wants to see some other piece of data that he never mentioned before or he wants to slice this data by some other dimension that was never talked about in the original design specifications.

If we all had a completely formed data warehouse, these changes wouldn’t be that big of a problem. However, few companies already have a perfect data warehouse. As hardware becomes cheaper and ram sizes keep going up, we are going to be less reliant on storing data in slow, physical data files. Instead we’ll start relying on virtual integration layers like QlikView or quicker modeling solutions like SSAS Tabular. But until we reach that data singularity, we can look at tools like BIML and LeapFrogBI to assist us in writing highly flexible ETL.

No matter what happens in 2014, it certainly purports to be an exciting year for business intelligence.

Brett Neuman has been developing business intelligence strategies for more than eight years at several fortune 500 companies. He has implemented data warehouse solutions and analytics strategies for many verticals including Health Care, Finance, Retail and Marketing. He has a strong background in application development, data warehouse architecture, data modeling, ETL, OLAP, reporting and dashboarding utilizing both the Business Objects and the Microsoft suite of Business Intelligence platforms. Brett joined StatSlice for the opportunity to empower organizations to make more effective business decisions through the availability of accurate, mission-critical information.