With tech hiring on a steady growth path during the first half of 2013, companies and recruiters say they have a virtually unchanged set of hiring priorities for the year. But, there is one new entrant that didn’t even make the top 10 list last year – data analysts or analytic talent. 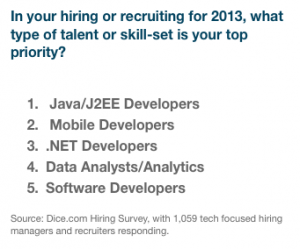 Despite many tech professionals feeling “big data” is played out, hiring managers and recruiters disagree and they ranked data professionals in the spotlight at number four on the list of top priorities. Harnessing information for business gains is becoming a core skill and a necessary investment companies are willing to make – particularly when data professionals have excellent communications skills. That’s driving “big data” job postings on Dice to more than triple year/year.

What’s not new is the continuing demand for developers – the closer to the application, the stronger the job market. Atop the priorities list for the second consecutive year: Hiring Java/J2EE developers. More than one in five of the 77,000 jobs posted on Dice contained some mention of the need for java know-how.

The bottom line: If you’re looking to hire veteran Java-fluent talent, expect plenty of competition for the human equivalent of the iPad Mini, this year’s “tech gadget everyone has to have.”

Speaking of hand-held devices, mobile developers jumped up a notch to number two on this year’s tech hiring list. No surprise there, of course: With smart phones, iOS, Droid devices and apps on a fast upward trajectory, mobile development skills should continue to see skyrocketing demand as we move toward mid-decade.

Rounding out the hiring priorities list for 2013? .NET professionals ranked third (up from the fourth spot last year); and, in the fifth spot, software developers (slipping down from second place in 2012).

In a marketplace where talent is the ultimate desirable, finding, hiring, keeping and evolving that talent often can make or break an organization.